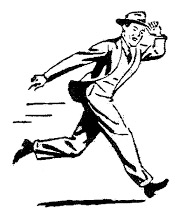 Some runs just flow; you feel powerful and in control. You can power up those glutes on uphills and run up them like you had a booster pack stuck on your back. Great runs, those.

More common are the seemingly never-ending torturethons where you feel like every step leaves a layer of your heart and soul on the pavement, chipping away at your stamina and motivation in equal measure. Don’t get me wrong; to finish a run like that is great as not only do you exercise your body but you also the lesser known muscle of willpower.

I did a 24k run yesterday but to be honest I pretty much hated all of it. All. Of. It. Even the downhills. All I wanted was to be done with it and the fact that I managed to push through still amazes me.

And to rub the crappiness of the run in my face I was overtaken by a guy who was running in a button up shirt and belted suit trousers. He did wear runners so at least there’s that!… He wasn’t running for the bus either; the dude really was out putting in some distance. I am guessing there was some religious reason to his attire but he did put my sweat-wicking, all singing all dancing Nike duds to shame. My excuse is that I’d done 17k at that point and was running uphill.

That and the run was really, really crappy.

I am a rapidly ageing (on the outside anyway) mother of two. I started this blog when I was preparing for a hysterectomy and trying to run my way to fitness. Hysterectomy is now in the past and running is what remains. Expect way Too Much Information and blunt honesty. View all posts by hystericalrunner

Can’t find it? Look for it here

Running back in time